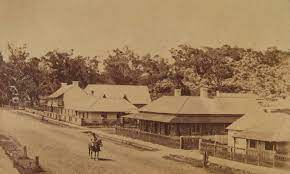 Dr. John SAMPSON ( hereinafter referred to as JS ) was a thirty-nine ( 39 )  year old man, with his home and medical practice in Berkeley, Gloucester, England when he fell foul of the law in1855. At this time the Police arrested and charged him for forging and uttering bank notes. He was later found guilty in the Gloucester court and sentenced to fifteen ( 15 ) years transportation to the Swan River Colony in Western Australia.

Millbank prison became his home for the initial six ( 6 ) months of his sentence, before transfer to Portland prison for the ensuing seven ( 7 ) months. He endured periods of ill health whilst in prison, then experiencing further illness and deteriorating health during the voyage to Australia.

JS boarded the vessel ‘ Clara ‘ in London on 19 March, 1857.  His behaviour during the trip was recorded as ‘ exemplary ‘.  The ‘ Clara ‘ ultimately berthed at Fremantle, WA, on 3 July, 1857. On arrival at the Fremantle convict establishment he was appointed a Constable. He was sent to the Bunbury Convict Hiring Depot in September 1857 and was promptly granted a provisional Ticket of Leave on 12 October, 1857. Due to the severe shortage of doctors at the time, he gained immediate employment with T. HICKS, the medical officer in Bunbury.

JS was regarded as a well qualified medical professional, suited to the urgent need of treating convicts who became ill, or injured, whilst working with road parties. He was also required to provide medical treatment for free settlers and their families. His name was highly regarded by Marshall Waller CLIFTON and the families of Australind.

JS successfully applied for his wife, Maria, to emigrate and join him in Western Australia.  She arrived aboard the ‘ Travancore ‘ on 8 August, 1859, and quickly fitted into the local community.  JS was granted a Conditional Pardon on 31 July, 1861. They soon appeared to be doing very well financially, however, had gone into debt to build a fine two ( 2 ) storey home in Clifton Street, approximately half-way between Victoria and Wittenoom Streets.  Sadly, in August, 1867, Maria SAMPSON died, at the age of forty-seven ( 47 ) years.

On 8 April, 1868, JS re-married, to Sophie WILHELM, at the Wesleyan Chapel in Perth.  She had been previously married to an expiree doctor, who had been tragically killed on Christmas Day, 1864, when his horse bolted.  She joined JS in the Clifton Street home. They also kept a carriage and horses on a forty ( 40 ) acre block they purchased near Bunbury.  They employed up to twenty ( 20 ) Ticket of Leave men to cultivate this block between 1864 and 1872.  These men also looked after his stable and horses, which he used to visit patients who lived in outlying areas. JS was regarded as an accomplished horseman.

JS established the first Brass Band in Bunbury in 1879 and donated all of the instruments.  He was a very keen musician, playing the organ at the Congregational Church each Sunday. He retired from his role as Bunbury Medical Officer in 1880, however, continued to work in his private practice. He and his wife continued to be active Church members and participated in local election campaigns. During this period, he and his wife had set out to acquire many properties in the Bunbury district.

JS became dangerously ill in early 1894, when eighty-one ( 81 ) years of age.  Although the worst outcome was feared at this time, he survived to live a further ten ( 10 ) years. He stepped down from his role as Church organist in 1902 and died in Bunbury on 19 November, 1904 , succumbing to Peritonitis/Cystitis. He was keenly admired, popular and of genial disposition.  There was a large attendance at his funeral and burial within the Bunbury Pioneer Cemetery.
Due to commercial re-development, this Cemetery was abandoned and the headstone was re-located to the Bunbury General Cemetery Pioneer Headstone section in 1986.

As an indication of his remorse for the earlier crime in England and his dedication to the Church, JS had the following verse inscribed on the side of his Memorial headstone:-

‘ Have sinned, have repented, have believed

And rest in hope and love of God by whose grace

For the merits of the redeemed I am saved

As all who read this may be saved ‘.