William GIBSON ( hereinafter referred to as WG ), was born on 11 July, 1824, at Gayton Thorpe, Norfolk, England to parents William and Elizabeth ( nee LAKE ). There is no evidence that WG attended school and it is most likely that he started work as a Farm Labourer at a young age.

His first marriage to Ann HARRISON, took place at East Walton , Norfolk on 18 September, 1848. The couple produced two daughters, Jemima, born on 25 December, 1848, and Rhoda who was born in 1851, whilst WG was in custody.

Their life had been very difficult during this harsh period and William was coerced into committing a burglary , in an attempt to assist him support his family. On or before 25 March, 1851, WG together with two accomplices , committed a break and enter at the Parish Rectory at East Walton. They stole a number of items , including spoons, forks, candlesticks and a communion service.

For his part in the crime, WG was sentenced to 10 years Transportation. On 11 October, 1851 he was sent to Pentonville Prison, Millbank, England. His file record showed that he was 27 years old, was married to Ann with two children, had been working as a Farm Labourer and was of the Protestant Religion. The Prison Records also noted that he was of good behaviour.

On 17 April, 1852, WG was transferred to board the Convict Ship “ William Jardine “, for transport to Fremantle, Western Australia, to serve the remainder of his sentence. He was one of 212 Male Convicts aboard the vessel and became well-acquainted with the following men :-

The convicts and crew endured a long and arduous voyage of three and a half months, before berthing in Fremantle on 4 August, 1852. Each had experienced hardship and terror, extensive sickness on board and regular mountainous seas made it very difficult to catch any quality sleep/rest. During his first year in Western Australia, WG was most likely employed in assisting to construct the Fremantle Prison, as was the case with most convicts who arrived around this time.

He was Granted a Ticket of Leave on 17 October, 1853 and is thought to have been assigned to the Bunbury Convict Hiring Depot. Due to the loss of these records, little is known of WG’s movements between late 1853 and the record of him working at “ Crendon Downs”, near Donnybrook, in 1857. It was while he was working in this area that he met the NEEDS Family, including their Daughter, Amelia, who he would subsequently take as his wife.

On 17 September, 1859, WG was issued with his Conditional Pardon. He had previously applied for permission for his first wife Ann and their two children to join him in Western Australia. Unfortunately , the re-uniting of this first family did not eventuate.

WG and Amelia NEEDS married at St. Marks Church, Picton on 8 October, 1861, witnesses to the wedding being Joseph and Eliza BUSWELL. The newly married couple initially set up in a basic timber slab and mud house on acreage near Donnybrook, with WG often travelling into Bunbury to trade his produce.
In the early 1860’s, WG and Amelia took up a 40 acre portion of the original Scott Farm, on the Preston River, at Eelup, where they farmed for the next 10 years, whilst producing seven children for their family.
During the early 1870’s they transferred to a house they had built in Clarke Street Bunbury, on a 10 acre block of land. They stayed at this site for more than 30 years, with Amelia bearing a further seven children and becoming widely renowned for her bread making.

In the period 1907/08, the family moved to a home in Constitution Street, where WG set up the first Market Garden in Bunbury, grew fruit trees and ran stock on the adjoining 10 acres of ground.
Although WG was illiterate, causing him to refrain from taking part in Public life, he managed to serve the community as an Acting Justice of the Peace, on occasions. He maintained a keen interest in the community that surrounded him.

The GIBSON family were well known for their hard work ethic and perseverance, earning respect from all who knew them. 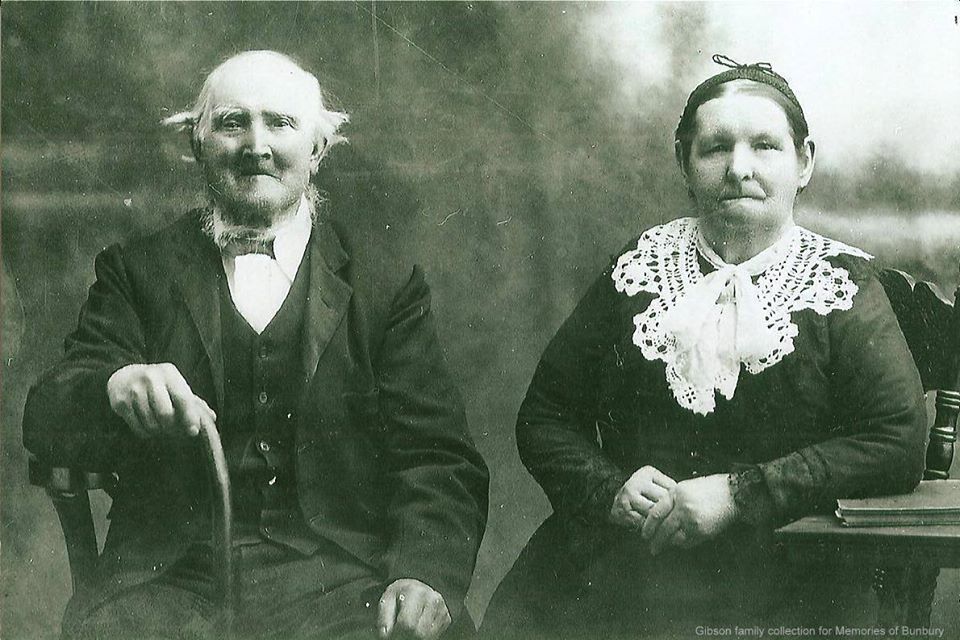